It's not widespread.  Plenty of gas stations are landscaped with strictly ornamentals.  I took a quick drive this morning to pass by several of the veggie gardens I've noticed in recent years.  I pulled over, in the first instance got gas, spoke to the gardeners, and with their permission took some photos. 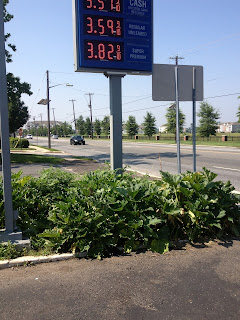 Exhibit A.  My new friend is Nepalese and planted these squash and cucumbers.  Obviously, his patch is highly productive, but adjoining a major highway-- not to mention the nearby pumps.  He shared that this is a long-term practice he's carried in his global migration.  Seeing these resourceful beds reminded me of Vietnam.  Especially in and around Hanoi, I saw people garden everything.  Literally.  Food growing on highway median strips, out of cut milk containers on balconies, in old cups on steps.  I had never seen such persistent food growers and greatly respect the inclination to tend plants. 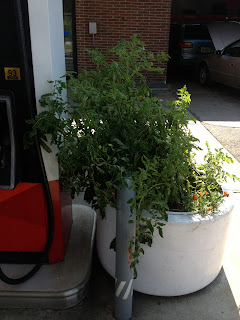 By the pumps, this gas station gardener had tomatoes, marigolds, and even some roses growing in large containers.  This brings me to my concern: is there potential contamination to the food?  What is the soil like in and around a gas station?  How does the air quality affect the plants?

Secondly, if there is contamination, given the issues with so much of our store-bought produce, is this still worthwhile given the risk?

I reached out to the wise interwebs.  A few friends said that strict environmental regulations usually mean that the soil is safe from gas, however, they worried about lead contamination from paint and from the massive amounts of car exhaust. 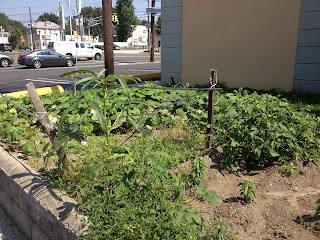 I headed to another gas station garden.  This gardener told me he emigrated from north India.  He said that he too gardened this way at home.  He had set up a bed behind his gas station, adjoining a neighboring business. 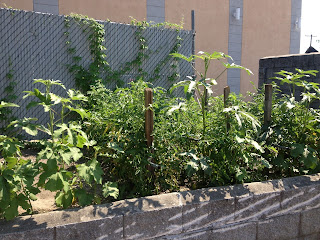 I could tell that the garden, on a raised bed, was highly productive.  So what about those lead contamination concerns?

On the one hand, I really respect these gardener's inclinations.  Many of these workers are on site more than 80 hours a week.  I respect that they use some of that time to also grow food.  Plus, gas stations are inevitably an environmental blight.  Plants are often the most powerful forces to clean soil and air.

I just wasn't sure about these plants...  I turned to Kevin & my internet crushes at Root Simple.  After sending away soil samples, it seems that the Root Simple gardeners may be dealing with some lead contamination, likely from paint in the 1950s.  They researched ways to safely grow.  The first suggestion is raised beds!  Go gardener #2!  The most labor intensive method is simply hauling up the contaminated soil and replacing it with new, safe soil.  However, each of these gas stations would likely be re-contaminated given their locations and services.

Phytoremediation, or introducing plants that pull lead out of soil, is another fantastic solution.  Guess what plant does that well?  Sunflowers! 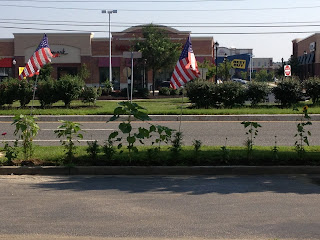 From the interwebs, our friend Mike shared his thoughts:  "I definitely love... to think that we can reclaim and transform all these 'damaged' spaces with vibrant and potentially edible spaces-- but the reality is that the soil/plant uptake of certain chemicals is definitely a real concern...  Arsenic or lead and some other heavy metals of VOCs and dioxins are unfortunately a whole lot  "stronger" than... plants like a tomato [in terms of] cleansing soil.  Underground storage tanks leak often, things spill, and stuff like lead has a significant half life with its neuro toxicity, [meaning it] hangs around a long time... In certain areas, the toxicity downsides outweigh the benefit of some local produce.  That being said, you can improve the health of a location aesthetically by planting non-edibles."

I would certainly love to see fewer gas stations and healthier job opportunities for my new gardener friends.  In the immediate future, I love their resourcefulness and will continue to watch their gardens grow.  I'd love to become better versed in plants that beautify toxic sites.  If any readers have research or links to sites that have experienced renewed health thanks to plant-life, or a combination of efforts, please share in the comments section.  Plants are powerful-- to the imagination and to the physical world.
Posted by Maiga Milbourne at 3:22 PM No comments:

Shout out to local business! MOORE BROS. rocks our world!

We have happily found a source for wine bottles to frame our raised beds as well as those of clients.  Moore Bros Wine has been so generous & kind in storing wine bottles for us post-tastings.  I unloaded a few hundred in my basement just this morning.  Rooted may need a wine bottle shed soon... the landscaping take on a wine cellar. 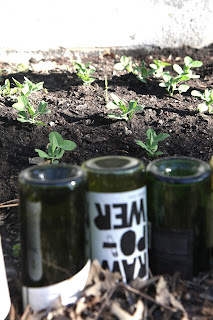 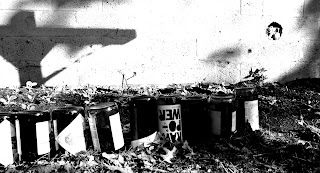 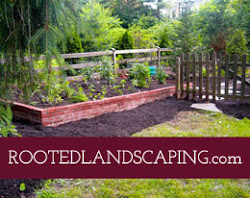